Israel unleashed a wave of airstrikes in Gaza on Friday, killing at least eight people, including a senior militant, and wounding another 40, according to Palestinian officials. Israel said it was targeting the Islamic Jihad militant group in response to an "imminent threat" following the arrest of a senior militant in the occupied West Bank earlier this week.

The strikes risk igniting yet another war in the territory, which is ruled by the Islamic militant group Hamas and is home to about 2 million Palestinians. The assassination of a senior militant appeared likely to draw rocket fire from Gaza, pushing the sides closer to all-out war.

A blast could be heard in Gaza City, where smoke poured out of the seventh floor of a tall building on Friday afternoon. "The Israeli government will not allow terrorist organisations in the Gaza Strip to set the agenda in the area adjacent to the Gaza Strip and threaten the citizens of the State of Israel," Prime Minister Yair Lapid said in a statement. "Anyone who tries to harm Israel should know: We will find you."

The violence poses an early test for Lapid, who assumed the role of caretaker prime minister ahead of elections in November in which he hopes to keep the position. He has experience in diplomacy, having served as foreign minister in the outgoing government, but his security credentials are thin.

The Palestinian Health Ministry confirmed the toll, saying a 5-year-old girl was among those killed. It did not say whether the others were militants or civilians.

Islamic Jihad said Taiseer al-Jabari, its commander for northern Gaza, was among those killed. He had succeeded another militant killed in an airstrike in 2019. A few hundred people gathered outside the morgue at Gaza City's main Shifa hospital. Some entered to identify loved ones, only to emerge in tears. One shouted: "May God take revenge against spies," referring to Palestinian informants who cooperate with Israel.

An Israeli military spokesman said it launched the strikes in response to an "imminent threat" from two militant squads armed with anti-tank missiles. The spokesman, who briefed reporters on condition of anonymity, said al-Jabari was deliberately targeted and had been responsible for "multiple attacks" on Israel.

The military also announced a "special situation" on the home front, with schools closed and limits placed on other activities in communities within 80 kilometres of the border.

READ MORE: NASA has figured out what mystery bundle of 'string' on Mars is 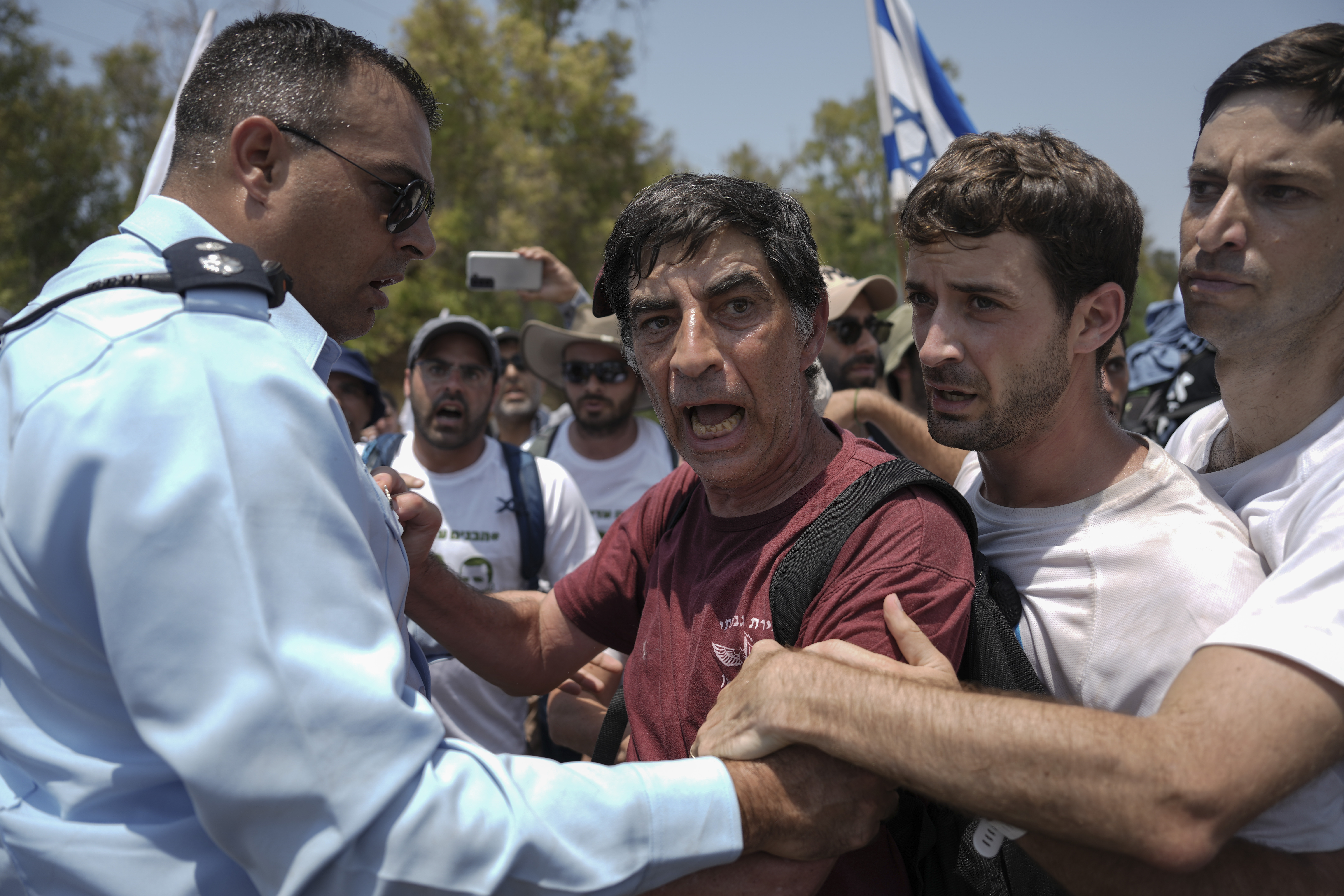 Israel had closed roads around Gaza earlier this week and sent reinforcements to the border as it braced for a revenge attack after the arrest of the Islamic Jihad leader in the occupied West Bank on Monday. A teenage member of the group was killed in a gunbattle between the Israeli troops and Palestinian militants.

Israel and the Hamas fought four wars and several smaller skirmishes in the 15 years since the militant group seized power in the coastal strip from rival Palestinian forces. The most recent war was in May 2021, and tensions again soared earlier this year following a wave of attacks inside Israel, near-daily military operations in the West Bank and tensions at a flashpoint Jerusalem holy site.

Islamic Jihad leader Ziad al-Nakhalah, speaking to the al-Mayadeen TV network from Iran, said "the fighters of the Palestinian resistance have to stand together to confront this aggression." He said there would be "no red lines" and blamed the violence on Israel. 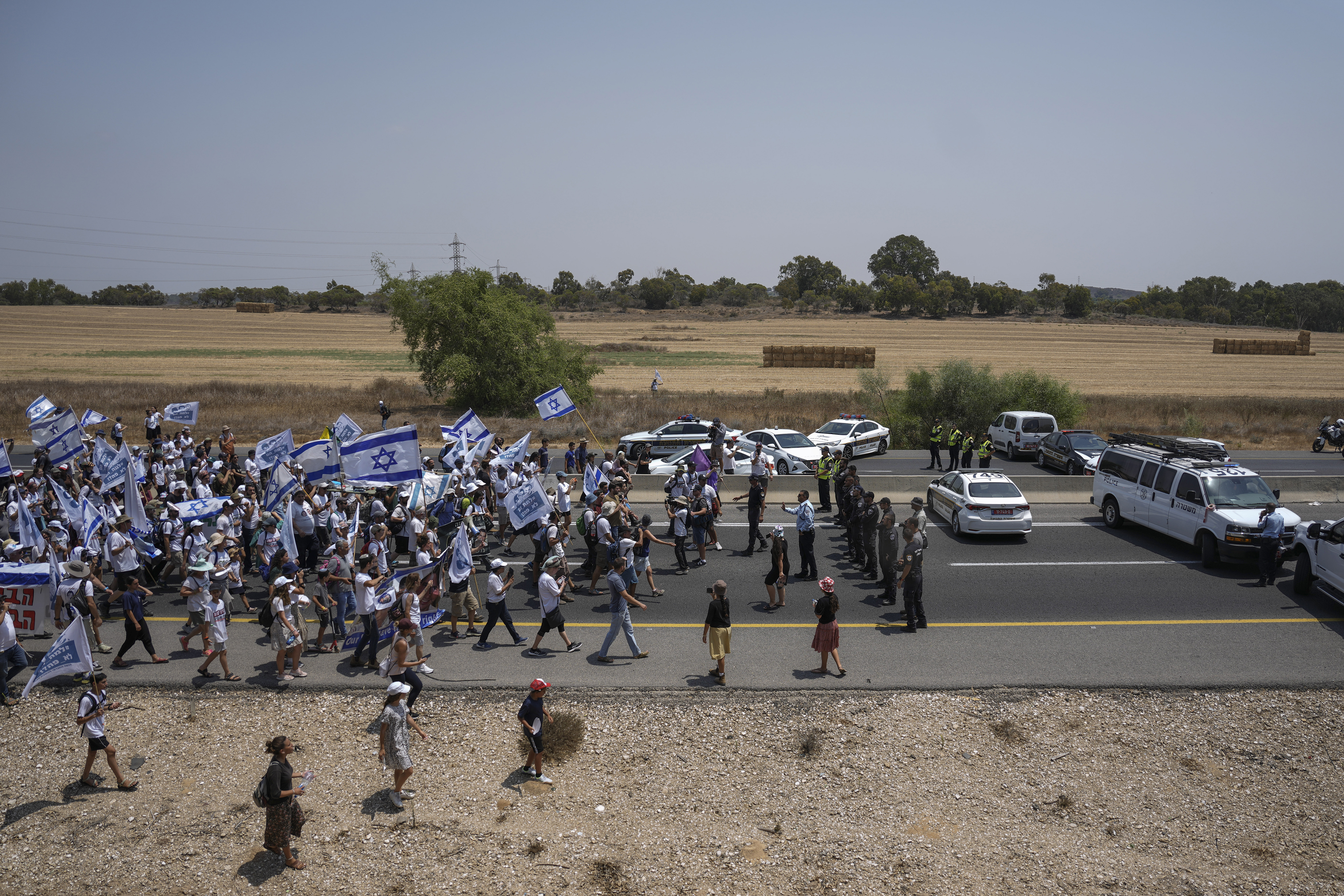 Hamas spokesman Fawzi Barhoum said "the Israeli enemy, who started the escalation against Gaza and committed a new crime, must pay the price and bear full responsibility for it."

Islamic Jihad is smaller than Hamas but largely shares its ideology. Both groups are opposed to Israel's existence and have carried out scores of deadly attacks over the years, including the firing of rockets into Israel. It's unclear how much control Hamas has over Islamic Jihad, and Israel holds Hamas responsible for all attacks emanating from Gaza.

Israeli Defence Minister Benny Gantz visited communities near Gaza earlier on Friday, saying authorities were preparing "actions that will remove the threat from this region." 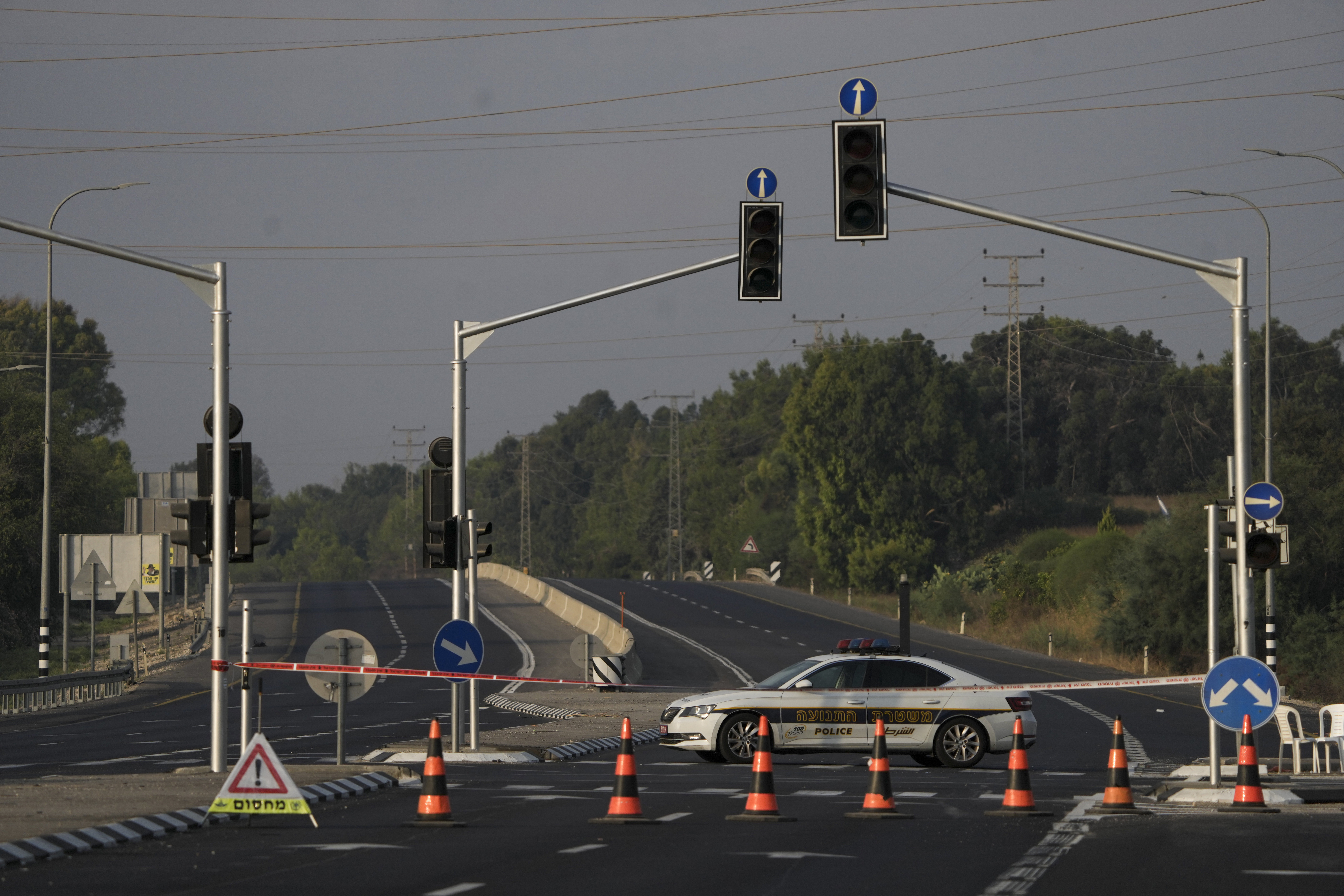 Israel and Egypt have maintained a tight blockade over the territory since the Hamas takeover in 2007. Israel says the closure is needed to prevent Hamas from building up its military capabilities, while critics say the policy amounts to collective punishment of Gaza's 2 million Palestinian residents.

Israel called off an expected fuel delivery for Gaza's sole power plant, which was expected to shut down early Saturday if the fuel did not enter the territory. Even when the plant is running at full capacity, Gazans still endure daily power outages that last several hours.

Earlier Friday, a couple of hundred Israelis protested near the Gaza Strip on Friday to demand the return of a captive and the remains of two Israeli soldiers held by Hamas. 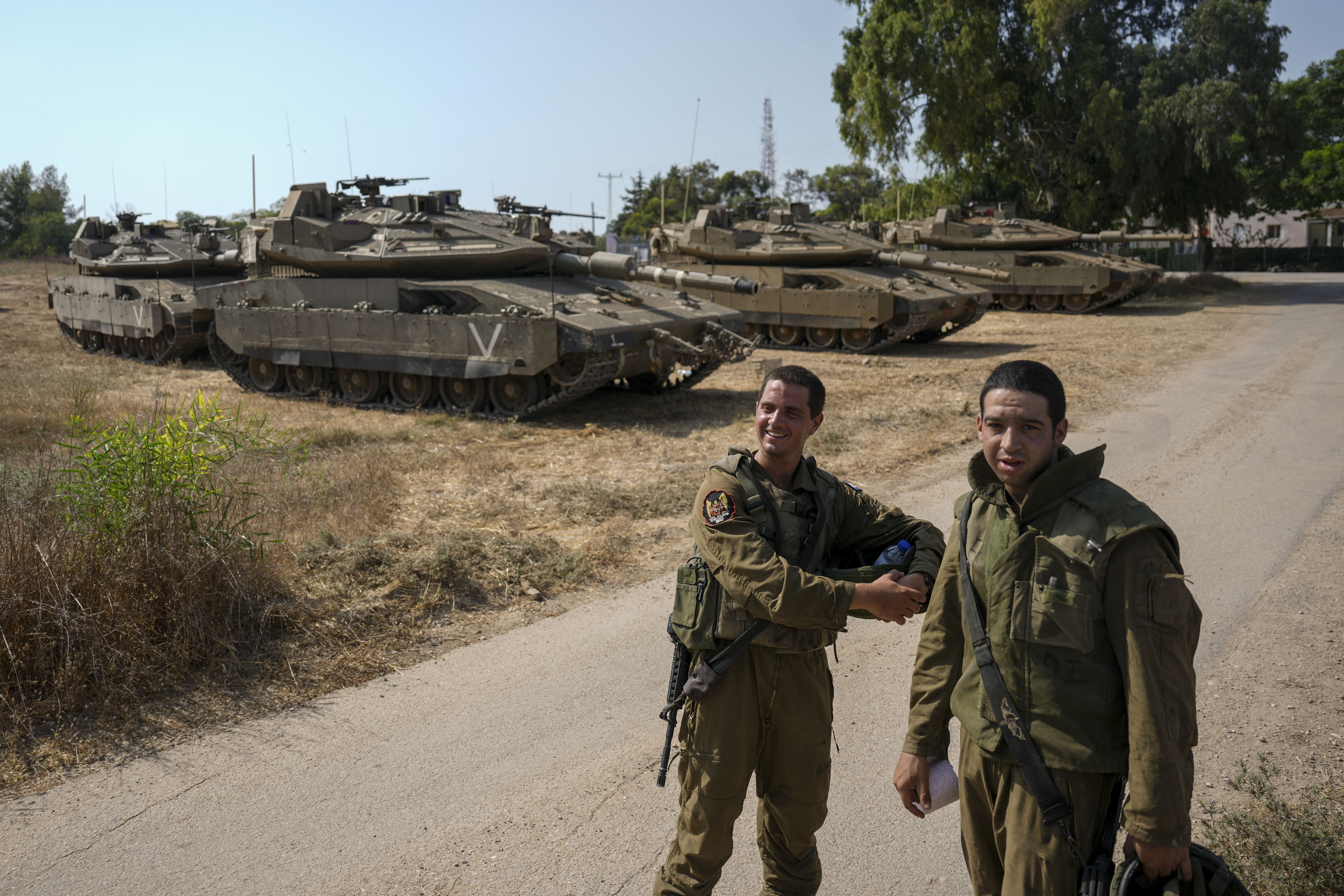 The protesters were led by the family of Hadar Goldin, who along with Oron Shaul was killed in the 2014 Gaza war. Hamas is still holding their remains, as well as two Israeli civilians who strayed into Gaza and are believed to be mentally ill, hoping to exchange them for some of the thousands of Palestinian prisoners held by Israel.

The protesters pushed through two police checkpoints on a road near the heavily-guarded Gaza frontier before stopping at a third.

They held a large sign demanding the return of the soldiers' remains as well as Avraham Mengistu, an Israeli of Ethiopian descent in his late 20s or early 30s. Mengistu's family took part in the protest. In June, Hamas released a rare video showing another captive, Hisham al-Sayid, an Arab citizen of Israel, in a hospital bed with an oxygen mask and an IV drip. It said his health has recently deteriorated. Reporters covering the protest did not hear any mention of al-Sayid.

Israel says there can be no major moves toward lifting the blockade until the soldiers' remains and captive civilians are released. Israel and Hamas have held numerous rounds of Egyptian-mediated talks on a possible swap.